Suppose you are in the game even for a while. In that case, you are accustomed to smoking weed in different containers, from weird-looking joints- helicopter or Pikachu-looking ones to some fancy-looking pipes and bongs, or maybe you are one of the seasoned veterans. But, of course, they are more into Oil Dab Rigs these days. And the dabbing game is a whole universe on its own.

The list of new and ingenious ways to smoke pot is ever-growing, and it is as long as your imagination wills it to be. So we won’t be covering pipes and bongs by all criteria. Meaning we won’t take into account any personal feelings and thoughts, or for that matter, no previous experience will be accounted for.

The sole purpose of this guide is to cover the 21 most expensive pipes & bongs in the world, and trust us when we tell you – there are some costly ones.

People have different hobbies – running, cycling, video games, arts and crafts, but some are collectors. Whether they are cards, cars, or pipes and bongs, the principle is the same. You are in constant search of new items to add to your collection.

While there are collectors, there are also one-time buyers who want to spice up their weed experience with a cool-looking bong, and for some having an expensive bong is a matter of prestige. To each their own. But this guide will serve all those needs 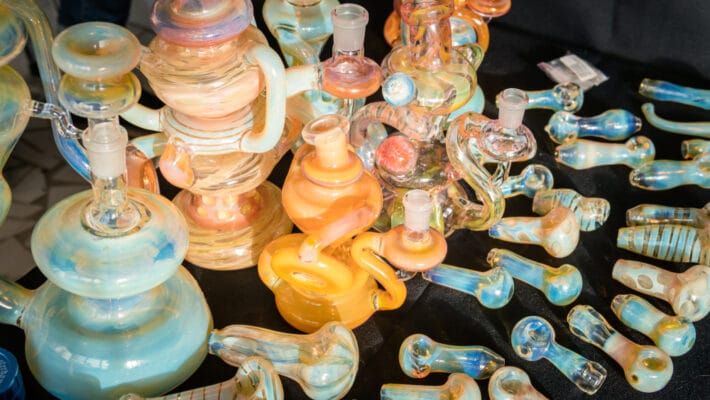 Here is the list of the top 21 most expensive pipes & bongs in the world:

The hard work, dedication, and the person-hours necessary to pull off this piece of art we can’t even begin to think of. You get a certain vibe; it seems like it is out of this world.

While some might be a little skeptical of keeping it in the house due to its demonic appearance, there is no denying that it indeed looks impressive.

When it comes to glass blowing, this is creme de la creme, as they would say. As the people who teamed up to make this glass are on the top of the game – Darby, Banjo, Scott Deppe, and Clinton Roman are some of the best glassblowers in the world. So when you pose a question: “Is the price a little overturned?”

We would have to argue that the quality and prestige follow the price, and somewhat the cost is part of the prestige. And we can’t stop ourselves, but the dream team that made this bong is the best team to come together ever.

The first and second places are interchangeable, as they are both valued at the same price of $1,000,000. We were also surprised when we uncovered that two bongs are valued at $1,000,000.

This bong is made out of a couple of pieces. It consists of 8 separate pieces, six dab rigs, and two dry pipes. So when you break it down, it is really like paying eight $125,000 pieces of glass. You’ll also need a unique mounting station for it, as it is 3m high. By the way, that station costs at least a couple thousand dollars as well.

A couple of things to know about this bong before we proceed. First of all, it is one of a kind, so the price is still quite steep; secondly, this item is a true piece of art. Primarily because of the details that Banjo and Joe Peters paid attention to.

While it is one of a kind, made by the greats and very detailed, we are not sure why there is such a giant leap in prices between this bong and the one beneath and one on top.

When people say that something is out of this world, they tend to mean it metaphorically; this time, we mean it literally. This bong looks like a literal satellite; it is made with Borosilicate glass and is very detailed.

In the world of collectors, this bong truly is worth the price it is valued at. People who are not a part of those communities certainly think that paying for a bong more than a couple hundred to a couple of thousand dollars is ludicrous.

However, the collectors and artists who made these bongs wouldn’t agree.

Another out-of-this-world bong, this time artist was inspired by outer space.

Both of these artists are some of the greatest. From their work, you can see the excellence they bring into this world.

Archaeologists found this ancient Mayan artifact inside the cave beneath the Machu Picchu mountain… It is another one of the 21 most expensive pipes & bongs globally but could have fooled anyone, to be honest.

It is made out of 21 Karat Gold and crystals. Deppe put more than 100 hours into this bong, and it is one of a kind.

This bong is somewhat of a game-changer – produced by the world-class bong brand – RooR. And they have made it, so it glows in the dark!

The first thing that comes to mind when you see it in person is the size of it. Neon Polished Quartz was used as a core material for this particular bong, and the material itself does not come cheap.

Another creation comes from one of the best in the business.

When it comes to price, it is not one of the most expensive pipes; however, the value is still high because the bong is made out of 1 piece of glass while being one of a kind.

A sophisticated smoking device for any gentleman.

One of the key features of this bong is that it is a 2 in 1, which means that you both get a bong and a bubbler. The two can disconnect to be used.

The Flying Dutchman is envious of this magnificent bong, while Davy Jones is merely jealous of the owner of this piece of art.

The collaboration of the great artists who put more than 100 hours into this creation is why the price is this high. The artists – Buck Glass, LaceFace Glass, and Joe O’Connell made this design fully functional.

What is interesting about this bubbler is the way AKM made it. Each artist was responsible for a unique part of the whole design. After they each finished, they merged it all.

When you win the 2017 Annual 420 Party Collaboration, you will indeed receive some bonus value.

Whenever there is talk about one-of-a-kind items, the price for them jumps drastically. And not to mention that the rig is fully functional.

A Hot rod-inspired bubbler completely functional and one of a kind.

Every Hot rod fan would pay a lot of money for this bubbler.

Whenever there is talk about Illuminati, there are many people, so there is no mystery why this bong is popular.

The sheer popularity of the bong comes from the design.

There is the fabled Excalibur; there are stoners… There is a joke somewhere there…

Who wouldn’t want the chance to smoke out of a legendary sword?

The creators thought of everything! This bubbler even comes with a safe travelling case so it wouldn’t break.

The amount of hard work put in could only be matched by the team behind the design.

Who could have thought that extremely bright blue and yellow could go well together?

When you see such a creative design hand blown together, you must stop and take a break to admire it.

We are getting to the part where the prices are not out of your mind expensive; they are just expensive now.

An almost anatomically correct heart made entirely out of glass, with all the veins and arteries, there was nothing more really made out of glass ever before.\

Like before, when we talked about the artists who made “Opal Hater” Haterade Bubbler, we said they thought about everything; well, these guys have their competitors.

This glass dab rig comes with its torch, and it is completely refillable. The design is not shabby at all either.

All the rigs, bongs, and bubblers listed above, even though they are all awesome, one of a kind, etc., do not have one thing the Squad chopper has – safety.

This one-of-a-kind pipe has suction cups at the bottom of its legs, so you needn’t worry about breaking it ever.

Last but not least. This bong doesn’t provide the artistic vibe all the ones before did. However, what it brings to the table is steampunk energy.

This bong is composed of the best elements you can think of – Custom Ashcatcher With 3 Chambers, Pyramid percolator, and triple coil percolators. Scientifically the best bong ever.