The prohibition of marijuana was a very stressful period for all weed lovers out there. But, luckily, things seem to be getting an uplifting turn following the legalization of our favourite herb.

Marijuana is highly controversial since some highlight its medical and therapeutic benefits, while others look negatively on that essential psychoactive aspect.

Today, in the modern age, we are happy to say that you can legally consume cannabis in certain parts of the world, including Spain, the USA, the Czech Republic, and many more.

However, even if you live in a cannabis-friendly country, many stoners and weed lovers work jobs that require soberness, referring to the conduction of various drug tests.

Now, we’re sure you understand that the best way to be secure you’ll be THC-free is not to smoke cannabis. Yet, a lot of straight individuals like rolling joints for the weed-loving part of the group.

What Does Science Say?

Scientific research was conducted in Germany at the Fribourg University, referring to Can You Fail a Drug Test From Touching Weed?

Ten random participants were given a simple task to roll a joint daily and take a hair follicle drug test daily. Most of these participants tested positive, and THC was present even four weeks later in their hair samples. To make it simple: You can test positive for THC from touching weed for up to 30 days.

How is that possible? Well, when you break up buds, some percentage of residue stays on the skin’s surface; hence THC can get through the surface of your skin and enter your bloodstream. This fact may seem odd since the residue mentioned above has no contact with your lungs and stomach, but don’t forget that the skin is the human’s biggest organ.

Can You Fail A Drug Test From Inhaling Unburned Marijuana? 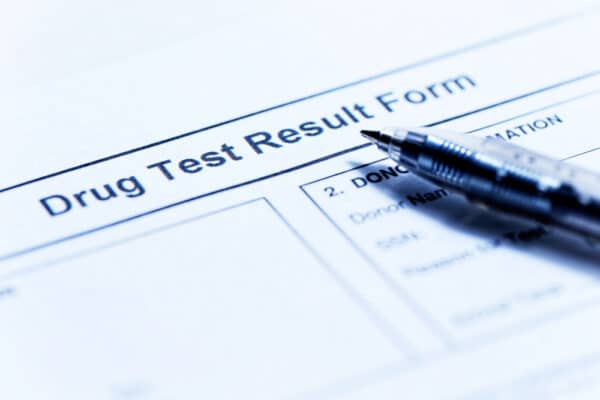 When talking about the inhalation of unburned cannabis, a big part of the pot-loving community is in a dilemma on whether they should avoid the mere presence of this controversial herb. First, we must state that marijuana needs to be exposed to fire to release those psychoactive abilities. Marijuana does evaporate, and that’s a fact; this process depends on several factors, including room temperature and humidity.

Don’t worry if you feel any soothing or relaxation effect after smelling dry weed since you are smelling only terpenes, which don’t come up on drug tests.

The cannabis industry presents a brand new market and keeps growing, offering various job positions that, for some people, mean direct contact with weed, especially when it comes to trimming, drying, and handling it.

Some companies conduct drug tests every week, meaning that testing positive might cost you your job. Unfortunately, this is often practiced in the USA since certified cannabis producers require motivated, responsible, and clear-headed employees.

Cultivators, trimmers, and budtenders are first on the line as they directly contact THC-infused residue.

Better safe than sorry, right? Those of you who want to make sure the test comes back positive should practice using quality rubber gloves, hats, respirators, glasses, and additional equipment specially made to protect you from unwanted residue.

Indoor farmers have to follow specific law regulations (depending on the state); hence a quality grow tent, and adequate ventilation are a must if you want to stop the uncontrolled spreading of THC dust.

Another reason these security measures are required is related to numerous health risks linked to growing and handling marijuana buds.

Some of the mentioned risks include pesticide use, mould spores, exposition of the lungs to THC residue, and aggressive (UV) lights.

Are Hair Test and Urine Test Results The Same?

Urine Tests are the most common type of drug test out there as they are very cheap, easy to use, and can be purchased almost everywhere. However, they are also easy to cheat and detect the drug’s presence for only up to 3 days.

On the other hand, Hair Tests can detect illegal substances for a much more extended period and are almost impossible to cheat while being much more precise than urine tests. In general, labs that conduct hair drug tests require samples around 1.5 inches long. Therefore, patients who are bold or don’t have the required length of the hair follicle cannot be tested, at least not in the short term. Unfortunately, this type of drug test is costly, making it unavailable for many.

Can You Fail A Drug Test From Touching Weed?

We are all aware that smoking Marijuana will lead us to fail any drug test. However, you might also know that merely being the so-called “second smoker” can also lead you to drug test failure. That’s because tests can find weed smoke in your organism just by being in a room full of Marijuana smoke. By inhaling the air, the weed smoke finds a way into your system. That sounds logical, but have you ever wondered if you can fail a drug test by merely touching the weed?

If you are looking for some answers in the field, you’re in the just right place. We will explain to you everything you need to know and discover this mystery that confuses many people.

Is this “touching Marijuana thing” a myth or a straightforward reality?

Whether you are working in a cannabis industry that provides the markets where marijuana is legalized, or you are simply a passionate weed consumer. We’re sure that you thought about this scenario. No one wants to fail a drug test, especially those you didn’t see coming! Therefore, it’s crucial to have a straight answer regarding the connection between touching marijuana and failing a drug test.

THC or tetrahydrocannabinol is the psychoactive substance on the forbidden list that is searched during every drug test. Since THC is illegal in most parts of the world, no wonder people seek an answer. The question of touching marijuana and, just because of that, failing a drug test can seem unrealistic. The answer to this confusing question is that you really can fail a drug test only by touching cannabis! It’s not a myth, and here’s how it happens!

Let us explain what happens when you touch the weed.

Just by rolling up a joint or few for you and your friends puts you in danger of indeed failing a drug test. You must wonder, “but how on Earth when it hasn’t even touched my lips?!”. Well, the answer is straightforward. Many studies worldwide confirmed that THC could be found in a person’s urine by rolling just one joint a day! Our skin is the one to blame because THC enters the body through our pores.

And not only that! Even after around 30 days of just touching marijuana, you can still expect to be a perfect candidate for a drug test failure! Not expect, be sure of that! Sorry to break it to you like that, but the fact that your body will still have THC in the system even after a month is very real.

In the end, we can only recommend you to put on a few pairs of gloves while handling weed. However, if you need to pass a drug test, proper protection is necessary. Of course, we are talking about hands, but have in mind that the skin on your whole body can absorb the THC.

All in all, recent studies conducted in Germany show that touching or any direct skin contact with marijuana can cause you to fail a drug test even if you just wanted to help your buddies roll.

Individuals working in the cannabis industry should take precautionary measures and obtain the needed equipment such as respirators, hats, gloves, etc.

Also, keep in mind that smelling dry weed won’t surely come up on any drug test as long as it’s dry (no fire involved).

With that being said, avoid touching cannabis buds directly or use rubber gloves.